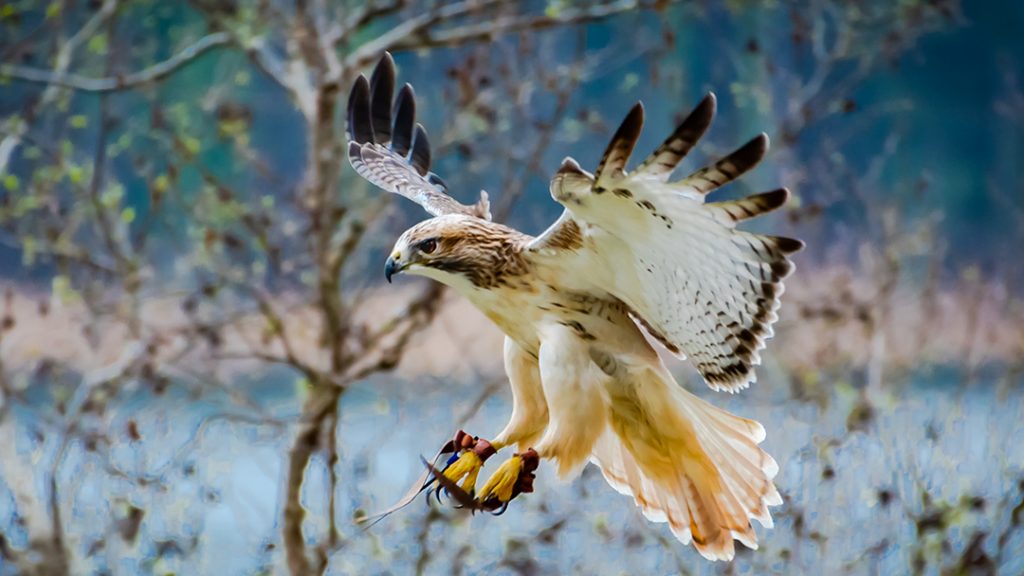 Quechee, VT – This winter and early spring, VINS is collecting information about the winter distribution of Red-tailed Hawks in the Champlain Valley of Vermont. The goal is to better understand the size of the wintering ranges required by individual Red-tailed Hawks, as well as the available food supply. VINS is tracking six Red-tails in Addison County, a known hotspot for wintering raptors in the state. Two birds have been equipped with GPS transmitters, and four with color bands. The GPS transmitters utilize cell towers to provide us with information about the birds’ movements and locations, while the color bands allow us to identify individual birds from a distance. During the initial encounters with all of the birds, we collected blood samples and recorded morphometric data. Morphometric data is information about the birds’ size, including their weight, wing length, and tail length.

We also equipped each bird with USGS bands. These are metal bands, each with a unique number, that we place around each bird’s leg. The USGS bands make it possible for researchers, including those not involved with this project, who spot a banded bird later to identify it and learn its age and location history. Understanding where a bird has traveled allows researchers to understand these birds’ migration patterns and habitat use seasonally and over longer time periods.

The two birds with GPS are now sending periodic updates on their movements as they come in range of cell towers. VINS field researchers are conducting surveys to get eyes on the remaining color-banded birds. Roadside surveys are also occurring to map abundance of Red-tailed Hawks throughout the county.

This research will be used to better inform VINS’ public education programs and any interested stakeholders in the region about ways to better conserve habitat for this species. Red-tails are not a particularly rare species, but their very abundance is part of what makes them a good raptor for this type of research. They are easily recognizable and familiar to many, including non-scientists, making them an excellent and approachable bird to discuss when introducing ideas such as habitat preservation and environmental conservation. Yet identifying and stewarding the homes of Red-tails also benefits other, less-often-seen and less-well-known species who also use this habitat, including rough-legged hawks, northern harrier hawks, snow buntings, horned larks, and various rodent and other mammal species.

Preliminary analysis of the data collected is beginning to show the home ranges of Red-tails wintering in Vermont in Addison County. As more locations and birds have been added, we have begun to get a better understanding of how these birds are using this area throughout the winter. Trends in abundance during winter are also becoming apparent – for example, it appears that there are more hawks in the northern part of Addison County. Several individual Red-tails appear to be using the same locations, which suggests that plenty of prey is available in these locations this year. Understanding the relationship between prey availability and Red-tail behavior can help us to predict how these hawks may use habitat when prey numbers change in response to climate change or changing land use. Such knowledge is useful in informing conservation decisions.

As March progresses, we expect to see numbers of Red-tails decrease as some of the birds in our study begin to move north – or they may stay and breed where they spent the winter. We will analyze this data in greater depth at the end of the season.

VINS’ work with two Red-tailed Hawks that are equipped with GPS is part of a larger project, the Red-tailed Hawk Project, wherein researchers are studying Red-tails throughout their entire range in an effort to understand the different subspecies, or types, of Red-tailed Hawks. Currently, we identify different types of Red-tails by their different plumage. Part of this research involves looking at the birds’ genetics to see if birds with different plumage also show genetic differences, as well as linking birds with different plumage to distinct geographic regions. We are collecting genetic samples from the hawks we study and sending them to the Cornell Lab of Ornithology for analysis to aid in this research. Understanding the differences between different subspecies of Red-tails, and knowing what specific habitat each type uses, is important to protect the species as a whole.

This is an ongoing, long-term project. Under the direction of VINS research coordinator Jim Armbruster and with support from Plymouth State University Professor of Zoology Len Reitsma and master bander Dave Merker, plans are already coming together for next winter, when we will be adding tracking of Rough-legged Hawks to the project. Reitsma notes that Merker’s 20-plus years of raptor-banding work in the area provided “the context for a new and more rigorous approach to documenting habitat use by red-tailed hawks in the Champlain Valley led by VINS and its research coordinator, Jim Armbruster.”

We also plan to equip more Red-tails with GPS transmitters next winter. Next year, we will also begin contributing to the Rough-Legged Hawk Project, which is an effort to understand how these birds migrate, in order to predict and prepare for how their migration may change in the face of climate change.

“This project is an exciting way for VINS to use our experience working with raptors to help increase our understanding of Red-tailed and Rough-legged Hawks’ use of the habitat in our state,” Armbruster notes. “We hope to inform our public with our findings and to better conserve and protect the raptors of Vermont.”

“The Vermont Institute of Natural Science is excited to play a role in these research projects, which are contributing to our understanding of these raptors’ ecology on both local and national scales,” says VINS Executive Director Charles Rattigan. “We anticipate that our research, in addition to informing our own environmental education programs, will aid in informing conservation actions, not only here in Vermont but also across this species’ range.”