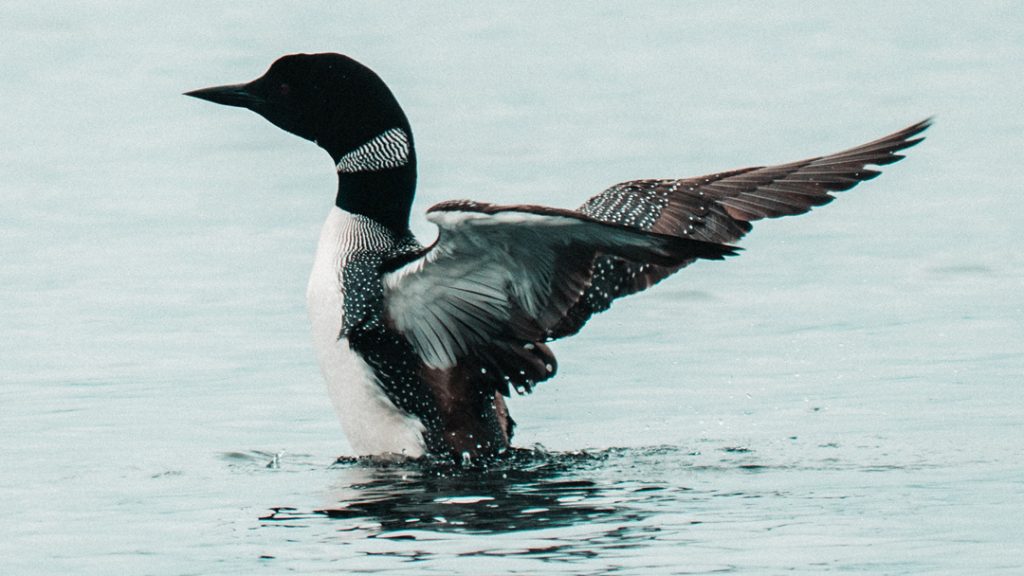 Quechee, VT – The Vermont Institute of Natural Science (VINS) is excited to announce that our Center for Wild Bird Rehabilitation (CWBR) staff is aiding in monitoring the health of avian wildlife. Partnering with various organizations, CWBR is contributing to research efforts focused on Common Loon and Ruffed Grouse conservation, as well as leading a study on blood parasites in Vermont wild birds. In addition to our work in rehabilitating injured, ill and orphaned birds at VINS, we are proud to make important contributions in support of avian conservation through these research initiatives.

VINS Center for Wild Bird Rehabilitation staff are conducting a study of blood parasites in our avian patients. There are three common blood parasites in Vermont; one causes avian malaria, and all three have the potential to cause disease and death in many bird species. While these parasites have been studied in Vermont songbirds, our goal with this study is to expand this research to a wider range of birds, and to learn more about their prevalence and distribution in the state. We collected blood samples from over 400 CWBR patients in 2020, including raptors, songbirds, woodpeckers, waterfowl and more. The ranges of many birds – and the ranges of their associated parasites – are expected to move as the climate changes, and this study could help us learn more about these alterations. We hope, with this study, to gather data that will not only inform our own work at VINS, but will also provide information to other groups, including Vermont Fish & Wildlife Department, to aid in research and conservation decisions.

We are also contributing to the Vermont Loon Conservation Project, an effort led since 1998 by Eric Hanson of the Vermont Center for Ecostudies, one of many organizations involved in loon conservation in the northeast. One significant part of this work is determining causes of mortality, such as ingestion of fishing gear (especially lead gear that causes poisoning), boat strikes, and diseases such as aspergillosis (a fungal respiratory disease) and avian malaria. In the past year, VINS has taken a more active role in loon conservation research, with CWBR staff working with Hanson to perform necropsies on birds that pass away both in the wild and during rehabilitation.

These birds had previously gone to the Cummins School of Veterinary Medicine at Tufts University for necropsies to determine causes of mortality. “Recent necropsies have revealed an increase in fungal respiratory disease, which is more likely to occur in highly stressed or compromised loons,” notes Hanson. VINS rehabilitation workers are also collecting blood samples to help track avian malaria in loon populations in the northeast.

“Increases in diseases and parasites could be one of the major effects of climate change, and monitoring these changes will be key in guiding both future research and conservation actions,” Hanson says.

Finally, we are aiding in conservation research about Ruffed Grouse, whose populations have been declining in many parts of their range in recent years. One potential cause of this decline is West Nile Virus (WNV), and CWBR is providing blood and feather samples from our Ruffed Grouse patients to the Vermont Fish & Wildlife Department, which is participating in a wider-scale study to see if WNV is affecting grouse populations. The study has until now focused primarily on hunter-collected grouse, so we are bolstering the number of samples collected, providing about 25% of the state’s samples in 2020.

“The overarching goal of these projects is to help with monitoring the health of avian wildlife in Vermont,” says VINS Lead Wildlife Keeper Bren Lundborg. “As a rehabilitation center that treats hundreds of birds of all native species in Vermont, we are in a unique position to further this important work.”

The projects also reflect a key piece of VINS’ mission, notes Executive Director Charles Rattigan. “VINS’ research efforts are expanding as we actively work to engage in scientific research in Vermont, and the Center for Wild Bird Rehabilitation’s data collection is an important component of this work,” he says. “We hope to gain, via these endeavors, a better understanding of Vermont and New England ecology.”