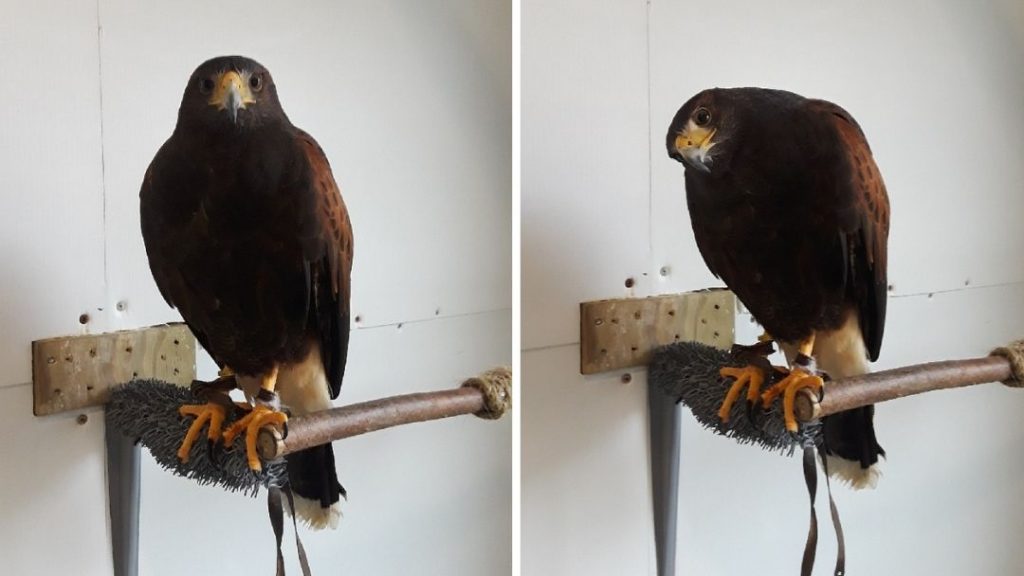 Quechee, VT – The Vermont Institute of Natural Science is excited and relieved to announce that Paige, a Harris’s Hawk who flew off during a training session last month, is back home at the VINS Nature Center.

Paige came to VINS in November of 2019 from a licensed falconer in Texas. Paige had been raised by humans, and because of this upbringing, lacked the skills to survive in the wild. VINS Educators began working with her from the time of her arrival to train her as a VINS Ambassador bird who could participate in VINS’ daily educational programs.

It was during one such training session that Paige flew away from her handlers on July 13. VINS employees immediately took to the woods of the VINS Nature Center campus, searching for Paige and occasionally spotting her as she moved about, but unable to get close enough to coax her back. She remained around the VINS Nature Center for two days, as VINS employees continued to look for her and tracked her telemetry signal. But on the morning of July 15, Paige’s telemetry signal cut out. This left VINS staff unable to track her whereabouts, and relying on various sightings of Paige to locate her.

Over the next three weeks, local media took an interest in Paige’s travels, and VINS’ neighbors continually contacted VINS with potential sightings of her. It remained important to find and return Paige, as the human-raised bird from Texas lacked the experience in and adaptations to Vermont’s ecosystem that she would have needed to survive long-term.

On Monday, August 2, a local woman in Quechee contacted VINS. A Harris’s Hawk – native to the southwestern United States but certainly not to Vermont – had taken up a perch outside her window, and the bird looked familiar. A VINS Educator hurried over, and sure enough, Paige was sitting there, happy to step back onto her handler’s glove after three weeks’ worth of wandering. VINS staff does not believe Paige ever left Quechee, but as her telemetry device stopped working, we will never know the details of her weeks away from home.

The Vermont Institute of Natural Science thanks everyone who took an interest in Paige’s journey, kept an eye out for her on their own daily travels, and contacted us with potential sightings. Not only did our community help bring Paige home, but we were also tremendously bolstered by the constant support and help during this challenging search. We appreciate our neighbors more than we can say!