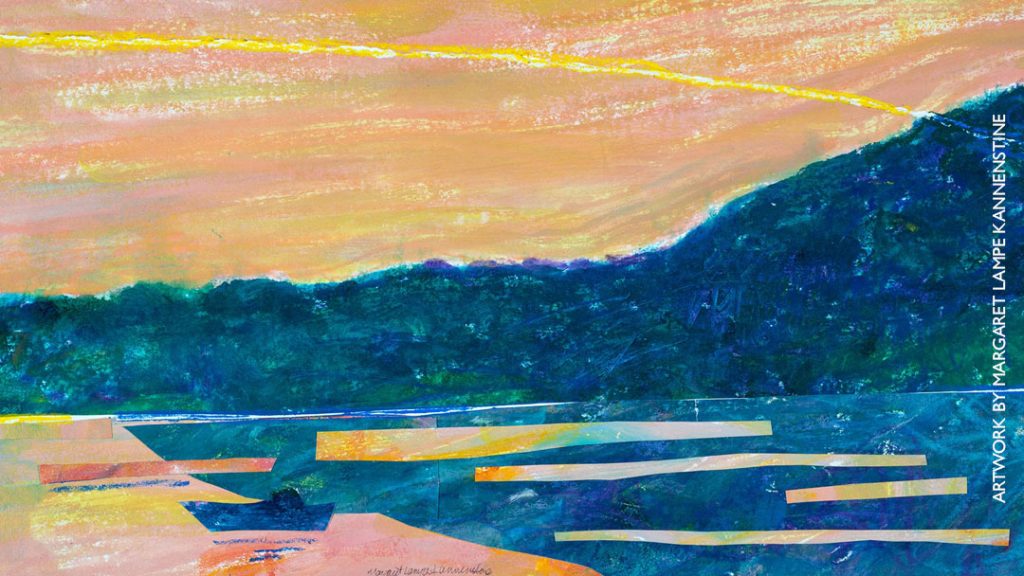 Quechee, VT – In celebration of VINS 50 Year Anniversary we are pleased to announce local artist Margaret Lampe Kannenstine’s art exhibit, opening on Saturday, April 2 at 10am. The exhibit will take place for three months, located in the Neale Pavilion at the VINS Nature Center.

In conjunction of this exhibit and milestone, VINS’ history took place in 1970. David Laughlin, a local Woodstock dentist, agreed to spearhead a study of the Ottauquechee River proposed by one of his patients. The pristine waters of the Ottauquechee that we enjoy today were badly polluted by waste and runoff. Joining Dr. Laughlin’s effort were Rick Farrar, Sally Laughlin, and June McKnight, local professionals from the Woodstock area. The group’s efforts mounted and ultimately led to the first water quality litigation in the state. The group’s momentum continued even after the victorious cleanup of the River; changing the way Vermonters thought about rivers and that is when the Vermont Institute of Natural Science became to what it is today, an environmental education not-for-profit organization.

There will be an opportunity to meet the artist, Ms. Kannenstine, on Saturday, April 23 from 3pm to 5pm, with a full array of artwork focusing on the Ottauquechee River. We hope that you can join us!

About the Artist
Margaret (Peggy) Lampe Kannenstine, from Woodstock, VT, is an artist whose acrylic paintings and works on paper have been shown widely for decades, and are held in the permanent collections of the Columbus Museum of Art in Columbus, OH; The Springfield Art Museum in Springfield, MO; the Hood Museum in Hanover, NH; The Bennington Museum in Bennington, VT; and the Fleming Museum in Burlington, VT. Peggy’s paintings are also in the collections of hospitals, academic institutions, corporations, and private collections around the country.

Peggy is past Secretary of the Board of Directors of the National Assembly of State Arts Agencies. She was twice elected to the VAC Board of Trustees, and was Chair for two terms. Peggy served on the Vermont Council on Culture and Innovation (VCCI) to study policy for the Creative Economy of our state. She is a past Board member of New England Foundation for the Arts; and was twice President of her local arts council, Pentangle. In 2005 she was appointed to the White House mini-conference on Creativity and Aging, held at the NEA. In addition, she is past Chair of the Board of Trustees of the North Universalist Chapel Society in Woodstock, VT. Peggy also served as Chair of the Board of Vermont Studio Center in Johnson, VT, and is now on the founding Board of the Center for Cartoon Studies in White River Junction, VT.